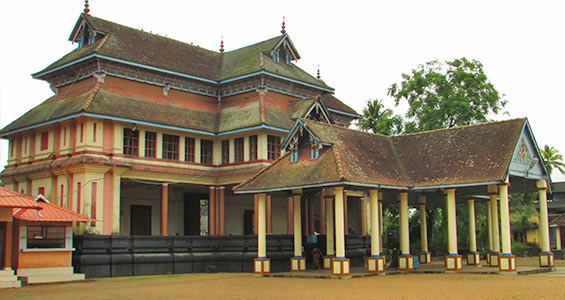 Chengannur Mahadevar Temple is one of the oldest and famous temples, situated in Alappuzha district. It is a sprawling temple complex with a circular Sanctum. Lord Shiva and Parvathi Devi are the main investitures of this temple. Differing from other temples, there are two main Shrines in this temple. Lord Shiva facing East and Devi facing West. The main shrine is a conical copper plated one. Devi’s main Idol is made with an alloy of five metals (PANCHALOHAM). The Shivalingam, is covered with a gold plate bearing an image of Ardhanareeswara - or the Shiva-Shakti manifestation of Shiva.

The other sub-investitures of the temple are Ganapathi, Shasta (Lord Ayyappan), Chandikeswaran, Neelagrivan, Ganga, and Naagar. There is also a shrine of SreeKrishna nearby.
The temple was constructed centuries back in accordance with an architectural design evolved by the famous Perunthachan. In the 18th Century the temple complex was damaged by fire and renovated later by Vanghipuzha Thampuran except the KUTHAMBALAM (Performance Hall). This could not be restored to its original position as it had been designed and constructed by Perunthachan. The structure of the Kuthambalam originally constructed by Perunthachan was in such a manner that the shadow of the performer would not fall on the stage if all the lamps were lit on each of the post of the Kuthambalam. The mukhamandapam in front of the temple and other mandapams in this temple are full of exquisite woodwork.

Compared to other temples, this temple has a peculiarity of its own, quiet distinct from other temples. The interesting belief and festival of this Temple is TRIPUTHARATTU which is considered as a symbol of fertility. This festival is connected with a menstruation ceremony, which is observed periodically in the temple. That is why this temple is also considered as Shakthi Peedam.